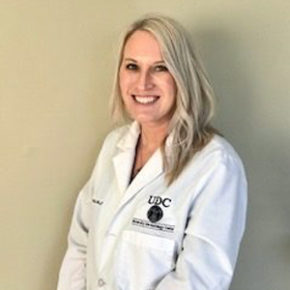 Brandy Smith PA-C hired on with UDC in 2017.  She received her first degree in 2006 through Indiana University with a Bachelors in Natural Sciences and Mathematics with a Chemistry minor. She has been active in the Military since 2006 when she joined the Indiana Army National Guard as a military police officer. In 2010 Brandy received a Bachelor of Science Radiation Therapy through IUPUI and began as a Radiation Oncology Therapist for the military.  She then was employed by Fayette Regional and Reid Hospitals through 2015.  March 2015, Brandy selected for a seat in the Interservice Physician Assistant Program (IPAP) for Indiana Army National Guard and began her active duty service in Ft Sam Houston, San Antonio. In 2016-2017 she did her Dermatology Rotation at Blanchfield Army Community Hospital in fort Campbell, KY where she was highly recommended by the Board Certified Dermatologist.  She has had a wide variety of training with rotations in general, oral-maxillofacial and Trauma Surgery.  At Vanderbilt she worked in Trauma and Burn units.